Last updated March 12, 1998, I viewed the eclipse from the M/S Veendam which was located between Aruba and Curacao during the eclipse. We were steaming on a heading of about 230 at about 5 knots. The image below were taken with Kodak Kodacolor Gold 400 print film using a Nikon 6006 and a Sakar 500mm F/8 Maksukov lens. The exposures are as noted.Rather than me provide more information about viewing the eclipse from the Veendam, I will point you to a much better source provided by Dick Greiner who was on the Veendam as well.
Dick Greiner's Veendam writeup

For those wishing to see what happens when you shoot a four second exposure on a ship, checkout this 'Football' eclipse picture from February 26th.

A 1/4 second exposure taken at about mid-eclipse 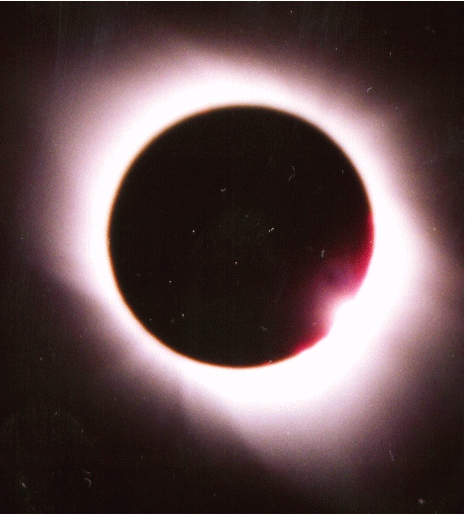 A 1/60 second exposure taken at just at third contact